Thai Lanna – Chasewater currently occupies an interesting building located where Hednesford Road and Wilkin Road meet. Some historical documents say it occupies the site of a former Watling Street Toll House. Watling Street was used by ancient Britons and paved by the Romans and sheep from Wales were herded to London markets via this route so tolls would have been collected somewhere. However, others disagree and the fact that the building is set back some 300m from Watling Street suggests that it was unlikely.

The 1884 and 1902 maps of the area show the building directly across the Wilkin Road from the Coppice Colliery Pit No. 8 also known as ‘The Corner Pit’ or ‘The monkey’, one of six colliery companies in the area. An old pit shaft is located just across the road from the car park. 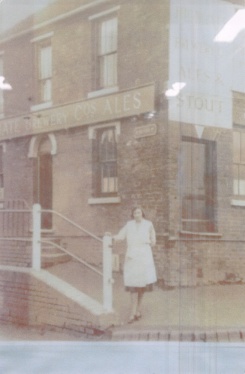 Information from locals indicate that the building has always been a pub. Built around 1870 (possibly earlier), presumably to serve the rapidly growing local mining community.

The pub entrance was via steps to a door on the east elevation. Directly opposite the door was a hatch for off-premises sales. To the right was the snug and to the left the bar. The bar counter served all three and is only a metre or so in front of its current location. The current car park has always been an open space, the main change being from a slag/gravel surface to tarmac.

This picture shows the steps and original entrance to the pub. We think this was taken in the 1940/50s

Originally it was known as The Old Wilkin Inn and subsequently, the Wilkin Inn, Ye Olde Wilkin Inn and now the Thai Lanna Restaurant. Locals still refer to it as ‘The Wilkin’ or ‘the Monkey’. Where the name Monkey came from is confused. Some say there was a vey large Monkey Puzzle tree nearby. The nearby Pit was colloquially named the Monkey, perhaps for the same reason. It does seem strange that the pit and pub had the same colloquial name, but the pub may have inherited the name after the pit closed. I have also heard stories of a local with too much ale onboard indicating towards the operating pithead wheel declaring it looked like a monkey! The real reason may be lost in time. Meanwhile there is however an old local poem linking all five local pubs and Watling Street (A5), which goes...

The Wind blew up the Watling,
The Sun shone on the Crown,
The Monkey climbed the Pear Tree, And the White Horse kicked him down !

Today the building bears little resemblance to the original. Major structural changes in the mid 1970’s saw it being extended towards the car park.  Newspapers found under the floor indicate that the extension was built in 1977 prior to it becoming a pub-restaurant. The building construction also changed the flooring levels, increasing the height of the cellar to make it a habitable space. The main entrance was also changed from the east elevation to the south elevation, facing the car park and the original access to the cellar blocked off. The original red brick walls were rendered using slag from the coal pits to give it its current rough look. The extension incorporated the ladies and gent’s toilets (reportedly a separate building in the car park) into the main building. Part of the original cellar was turned into a bar, whilst the original bar and snug were turned into a restaurant.